I grew up in Minnesota. I left Minnesota as soon as I graduated from college. I mean that—three days later to be exact. I packed up with my boyfriend, drove a big U-haul stuffed with his parents’ old couches and a trailer that was pulling his Subaru. I left the land of 10,000 lakes with a happy wave to my parents and a sigh of relief for myself.

For as long as I remember I hated Minnesota’s winters. I still remember vividly the first snow of my last year of college. Where others might be filled with a sense of glee and wonder at the beauty, I remember walking home from class that evening as the snow fell around me with a familiar feeling of “Oh F*&^! Here we go again—another five months of this crap.” This time though, for the first time, there was also a sense of lightness because my next thought was, “This will be my last.” At the time, I had no idea I would be moving to Oregon with my boyfriend, but I knew in my bones what I had always known, I would be leaving Minnesota as soon as it was humanly possible for me.

Speed ahead years later, I remember when I would call my grandparents back in MN. My gramps would always say in his joking (but serious) tone, “When are you moving back here sweetie?” I was his only grandchild (and still am) that didn’t live in MN. I would always respond in my joking (but serious) tone, “Likely not ever Gramps. Best get used to that.”

So I’m not sure why but it still astonished me several years ago when I discovered something in my mom’s MN basement. In a box of my childhood belongings was my very first journal. You know, the kind that says, “DIARY” on the front and is equipped with a little lock on it, just right to keep in girl secrets.  My eyes widened when I read one of the first journal entries I had ever made. Ever. No kidding it was basically, “I hate MN winter. I’m leaving here as soon as I can.”

I’m telling you I always knew.

So that’s why when we stopped at our first Oregon gas station those three days after college graduation and the attendant said, “Why do you want to move here? The winters are terrible!?” I looked him in the eye totally dead pan serious and said, “You have no idea where I’ve been.”

To me, Oregon was as good of a place to start as any—because it wasn’t Minnesota! But that year when we moved into a new place in January and in the backyard a huge tree bloomed rose like flowers in the middle of FEBRUARY! And then the tree next to it grew tulip like flowers all over. I felt like I had died and gone to fairy heaven; and I knew that I was home.

This morning on my walk I passed a giant Camellia tree chalk full of lovely dark pink flowers. It was just standing there like it wasn’t a total miracle that a tree is covered with flowers AND in February. I thought of that moment, in my first Pacific Northwest backyard when I discovered this wonder and it made me smile.

Almost every day, but certainly every week, I think THANK GOODNESS for you Pacific Northwest. I’ve died and gone to human heaven—where the green lasts all year, the trees are tall, the water is prevalent and trees bloom flowers—in the middle of winter!

Amen. And thank you. 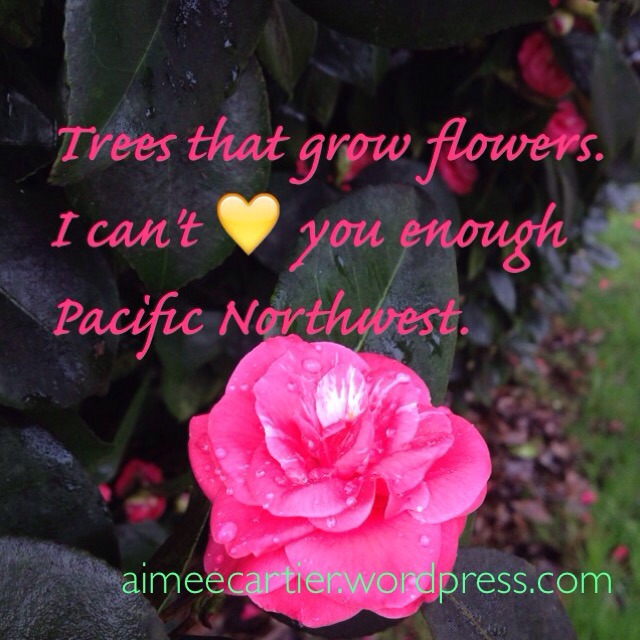